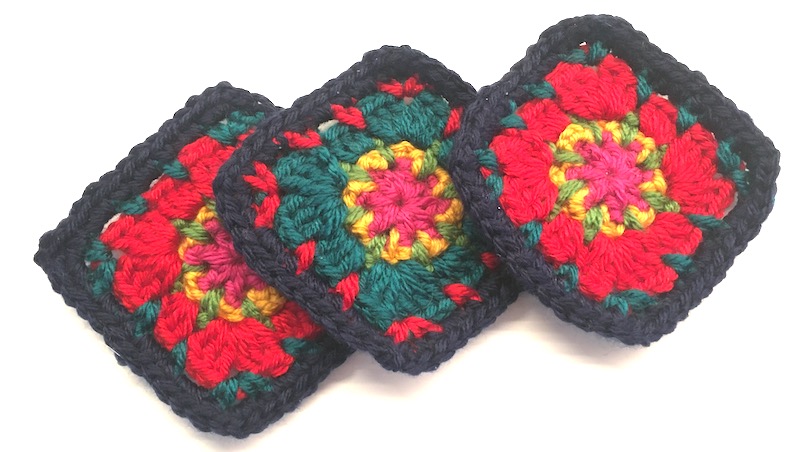 Part 4 of the crochet-along starts here, but i you’ve just found this page, you can start with these squares, and then go back and do Parts 1 (rows 1-6 of main squares), Part 2 (rows 7-9), and 3 (finishing the main squares) starting here. But if you prefer standard written instructions instead of the version with pictures, head here.

And don’t forget, if you’re still on one of the previous parts, it doesn’t matter – there’s no rush, just take as long as you want!

Round 1: Either make a circle from 4 chain stitches joined with a slip stitch, or start with a magic circle.

Now work 3 chain stitches [counts as a half treble and 1 chain], then work (htr, 1ch) seven times, and join with ss to the 3rd chain at the start.

Fasten off. You should now have a circle of spokes – like the beginning of the main square, but a bit smaller.

Round 2:  Join yarn into a space with a ss, (work 3ch, then slip stitch into the next space) 7 times,

another 3ch, and join with ss to the first stitch. Fasten off. It should look like this…

Round 3: Join yarn in a chain space on Round 1, work 1 chain stitch [counts as a double crochet],

(work 2ch, then a double crochet in next sp on Round 1) 7 times – you’ll have a stitch of the current round sitting next to a stitch from round 2 – here’s the first one done.

Finally 2 chain stitches, join with ss to the 1st chain. Fasten off. It should look like this…

Now go back to the asterisk and repeat from the * twice – you should now have three sides and four corners completed, so just work 3htr in the next 2ch-sp, and join with ss to the third chain. Fasten off. Here’s what that looks like when the round’s finished.

*now work (2ch, double crochet in next space between groups of trebles – these groups of three trebles are quite close together, so make sure you’re working between the groups,) twice, then 2ch, dc into the corner space, 2ch and a dc in the same corner space – it should look like this…

Repeat from the asterisk twice, then to finish the round (2ch, and dc in next sp) twice, and finally 2ch, and join with ss to the first ch. Fasten off. Here’s the completed round.

Last round coming up…

then * (a double crochet in the next stitch, then 2dc in the 2-chain space) this bit in brackets needs doing 3 times,

You can vary the colours as you like! I’ve chosen to do the final round in the same colour as the final round of the main square, but it’s entirely up to you! You need to make six of these squares – that’s 3 for each side of the bag.

Don’t forget, you need to make 6 of these squares altogether, so get crocheting . Ready for Part 5? That’s here

Share your photos on social media with the hashtag #SpringBagCAL

If you missed the first parts, head back here to begin. And to recap on part 2 (rounds 6-9) see here.

There are just three more rounds left to go to complete the main square and Part 3 tells you how to work these – don’t forget, you need to make two of these. And if you want the standard written instructions, they’re here.

Here’s what the completed square will look like… Again, don’t worry that it’s now exactly square at this point.

* Now work 3 trebles in each space between the groups of trebles on the row below until you get to the next corner,**

You need to repeat the last bit, from the asterisk * twice – you’ll now have worked 4 corners and 3 sides. To complete the last side, work from the single asterisk * and stop at the double asterisk **. To finish, join with slip stitch to the 3rd ch. Fasten off.

Round 11: Join yarn in corner and work 3ch [this counts as a dc and 2ch], then work a double crochet.

*Now work (3 chain and a double crochet in next space)

repeat this step (ie 3ch and a dc in the space) until you get to the next corner,

Now for the last round – hurray! This one works a double crochet edging all the way round. You’ll be working both into stitches and through the chain spaces on the previous round.

when you get to the corner you’ll do a double crochet in the stitch before the corner space ** (Remember that where you joined the previous row together, there’ll be a ss into a chain stitch, and this will be counted as a dc, so don’t forget to work a dc into that)

then in the corner space work (dc, 2ch, dc). Now repeat from the single asterisk * twice, then go back and work from * to **. Finally join with ss to first ch. Fasten off.

You should have 35 dc on each side with a chain (at the corners) at each end, so altogether a side is 37 stitches wide.

Next week we’re going to make the small squares that sit across the top of this square and and side panels of the front and back, and the gusset that goes round the bag so make sure you’ve completed your main squares by then…

The next part of the pattern can be found here. And meanwhile, I’d love to see some of your squares on social media with the hashtag #SpringBagCAL

Don’t forget if you get stuck, just get in touch with me on facebook, email or instagram and I’ll try to help.